I grew up in rural Saskatchewan on a farm near Langenburg where my vast imagination had me travelling to fantastic imaginary landscapes at a very young age and acting out crazy adventures instead of the daily chores I was supposed to be completing instead. My mom and dad were always supportive, if not understanding, and I could not have asked for a better parents.

I started writing them down in the form of doodles and characters I would draw in class when I was supposed to be taking notes. This trend continued into university where I completed a Bachelor of Fine Arts in Film and Video. Although I did not make much use of my degree, the friends and experiences I had there were some of the best I ever had. I met my wonderful wife there. That alone made it worthwhile.

Then the real world hit me. 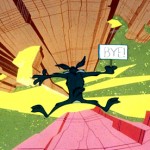 Much like Wile E. Coyote I did not realize I had run off the cliff until I looked down. I spent the next several years trying to figure out how to survive in in the ‘real’ world.

When I met my daughter in April of 2008 it hit me like a ton of bricks (again, much like that poor coyote). Simply put, she put my entire life into focus. My whole life I had spent trying to figure out what I was supposed to do when it was as simple as it had been when I was a child. I had this mental picture of the person I wanted to be and it was not the person I was. So sitting there I stared down at those little eyes that looked up and saw me for who I was. The choice became simple: either I would be that person I always wanted to be or I wouldn’t.

There was no way I was going to let her down. Three and a half years later I stand on the brink of a career change. This is never an easy task. The difference being that this time I know the edge of the cliff is there and either this ACME contraption will crash and burn or it will actually fly. Either way, I will be damned if I let that roadrunner defeat me. 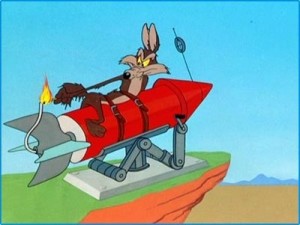 See you on the cavern floor,
Dyson