The characters are loosely based upon myself, my wife and my three older sisters. Dim is a sarcastic duck that is reluctantly dragged along on his friends adventures. Tee is a nervous turtle who has hoarded anything and everything inside her shell. ReNeigh is a ‘take-charge’ horse and self-proclaimed leader of the group. Corky is a taciturn squid that will bravely take on any challenge to help her friends. Aries is a melodious mutton that has an unhealthy attraction toward wolves. Shenanigans abound as these characters embark on a kooky adventure to rescue their friend, Aries the Sheep, that has been kidnapped by hungry wolves and dragged into …the Wolf’s Den!

Also, there is a five page short story at the end of this book about the adventures of Dexter D. Daring!. All he wants is to lead a normal boring life. Except that with a name like Dexter D. Daring one can hardly escape adventure and excitement because everyone you meet assumes that you’re some sort of super spy/hero! Follow Dexter as he is reluctantly dragged from one adventure to the next due to his unfortunate name. 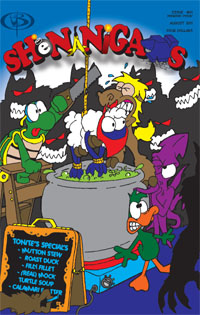 Shenanigans # 01: The Wolf’s Den/Dexter D. Daring and the Job Interview of Doom!
32 pages:
- 2 pages (Front and Back Cover) in colour.
- 30 pages of greyscale (Black and White) content
- All Ages